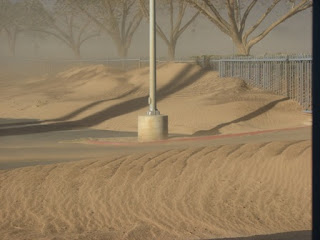 The front of the Middle School 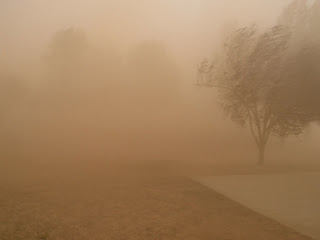 By MICHAEL PERRAULT
The Press-Enterprise

"It's mind-boggling," said homeowner Thom Creekmore, glancing at a stately grandfather clock he fears may be ruined.

Creekmore is among residents in the Sundance development west of Highland Springs Avenue who were hit particularly hard. Their homes border pastures with little or no ground cover.

After unsuccessfully trying to cleanup, Creekmore moved his pregnant wife and two children into a hotel and out of their home on Daisy Drive. He said "baby powder-fine" sand and dirt mixed with dry manure cloaked the interior of his 4-year-old home, prompting health concerns. Doorbells and light switches no longer work, water in a hot tub looks more like moldy hot chocolate, and thick dirt shrouds furniture, carpets and nearly every crack and crevice.

In surrounding areas, schools, businesses and government offices have been in cleanup mode as well.

Some refrigerators and freezers inside Beaumont schools had to be repaired two or three times, Reynolds said, after sand worked its way into moving parts. And the district's workers had to coax cows off campus after they roamed over fences breeched by 4-foot drifts.

Reynolds and other school district officials are working to obtain federal funds to help offset cleanup and repair costs.

At Mt. San Jacinto Community College, where damage is now estimated at about $2.5 million, it took 300 workers to bring the campus back to life, said spokesman Bill Marchese.

Wind-blown dirt and sand that Marchese likened to pancake flour was driven into door locks, ceilings and computers. The college brought in specialists to handle delicate cleanup tasks inside computers and other expensive equipment.

"It's like water almost; it goes where it wants to go," Marchese said.

Although such windstorms are common in San Jacinto Valley and Pass communities, damage of this magnitude hasn't been seen since the late 1990s, city officials said.

At Sundance, nearly 200 homeowners sought help from Pardee Homes. The company and other construction firms responded, sending in water trucks, front loaders and other equipment to cope with almost 34,000 tons of dirt.

Still, he anticipates his family won't be able to return to a clean home until after the Christmas holidays.

A few houses away, neighbors called in a team of professionals to suck sand-clogged insulation out of their attic so new insulation could be put in.

Sharon Glover's daughter Jennifer and son-in-law Daniel moved in with her after manure-laden dirt from a nearby cattle pasture blew through Sundance, into their home and covered the 4-month-old baby's crib.

The extent of damage in homes varied widely in the Sundance subdivision, where more than 100 homeowners filed lawsuits against Pardee Homes just days before the October windstorm.

They allege shoddy construction of windows, doors, ventilation, foundations and other home construction, according to a civil complaint filed in Riverside County Superior Court.

"We've been asked to now investigate issues pertaining to damage from the sand," said Lee Jackson, an attorney with Milstein, Adelman & Kreger in Santa Monica who represents the homeowners.

But Mike Taylor, vice president and regional manager for Pardee Homes' Inland Empire operations, said shortly after the windstorm that no homes are completely air tight.

Creekmore, who used fingers to etch "Clean me" on one dusty tabletop, is trying to keep a sense of humor.

But he shook his head as he eyed the living room.

"You can taste the dirt in the air," he said. 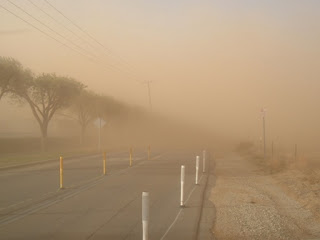 Posted by Calorchard at 9:17 PM